So why is it that when I visit website after website, day after day, I see variations on a single design theme for websites — white.

Some brilliant designer is sitting back in his Aeron right now thinking, “Ahh, my next design, yes, I’m going to do white. But the background is going to be an off color of white — like glacier white — and it’s going to be absolutely striking.”

Seriously, web design today is “follow the leader” and make sure you use plenty of white in your design.

Good web design should infiltrate every aspect of the page. You should be able to tell the brand and name of the site pretty much no matter where you are on the page.

Here’s a fun thought experiment. Below are articles from three health websites. Can you tell which site belongs to which article? 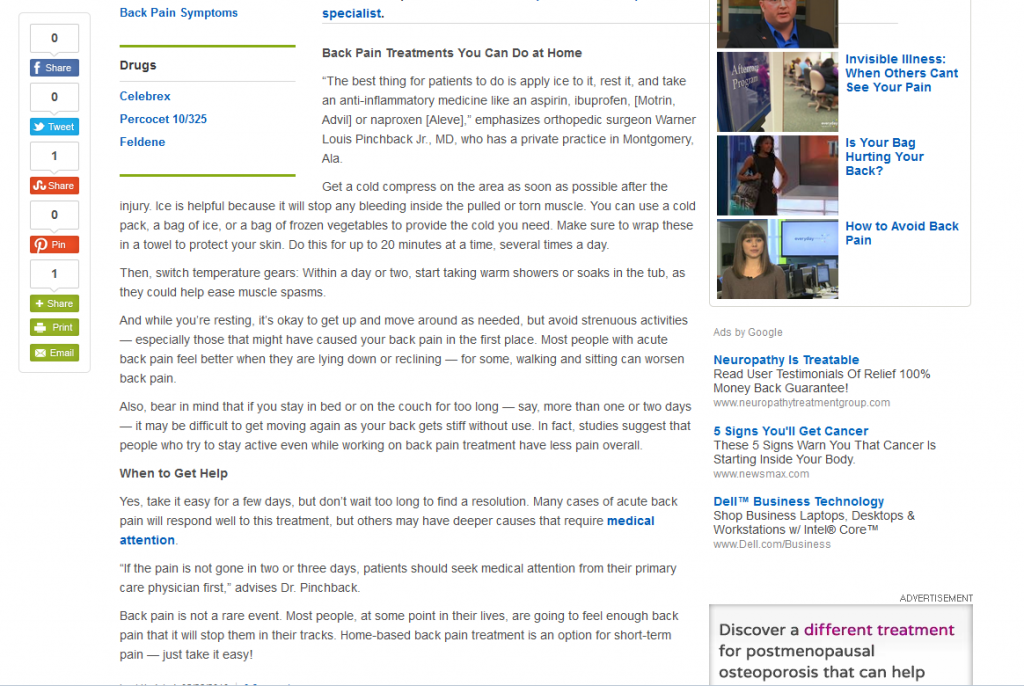 Unless you were intimately familiar with each site (or worked on them), chances are you’d have no idea which one is the Mayo Clinic, which one is Everyday Health, and which one is WebMD. They are all so plain and all so generic that they look nearly alike.

I could do this same experiment using other big-name brands too — like HuffPo, TechCrunch, etc.

I could even do it with scrappy startups like Medium, because the only way you’d ever know you were on their site was that the letter “M” in a square stands for Medium. Who doesn’t like large fonts and big imagery? But that’s so… you know, 2010. You know what that sort of design shouts? “We’re so cool, we don’t even have to tell you our name when you’re reading one of our articles. The “M” speaks for itself.” No “About us” or “Terms of use” at the bottom of these stale, blank white pages on Medium — because, you know, they’re different.

And that’s the problem with web design today. It focuses more on annoying AJAX backend magic (most of which is cruft that does little to actually enhance or speed up the user experience), and less on elegant, colorful design.

Color won’t hurt you. In fact, studies (Humar et al 2008) have been conducted on this very issue — what color combos make for the most legible reading online?

Guess what’s not number 1? Black text on a white background. It scored number 5 in legibility:

A study like this explains why the old word processor software, WordPerfect, used white text on a blue background as its default color scheme — it was more readable than black on white. (An older study suggested blue text on a white background was subjectively preferred over black on white (Ling & Schaik, 2002)).

Users found the grey site less appealing than the other two,
which is in line with the users’ judgments expressed in the first
study. In addition, its lack of attraction appears to have had conse-
quences on the different indicators that were taken into consider-
ation in this second study: participants spent less time navigating
the grey site than they did navigating the orange site, and included
fewer items of information (from both linear and nonlinear texts)
in their written productions.
Since each experimental site was presented in a single colour,
the ‘‘insipidness’’ of the grey colour may have led to a degree of dis-
engagement, both in terms of mobilizing resources for performing
the task (less time spent navigating the site) and in terms of effi-
ciency (fewer items memorized and retrieved).
Blue seems to have had a slightly different impact from that ob-
served in earlier studies. Although, in accordance with previous re-
search, the blue site was greatly appreciated by visitors, it did not
seem to motivate them to stay on it for longer. In actual fact, less
time was spent on the blue site than on the orange one. This could
possibly be interpreted as an indication of greater efficiency, at
least in the case of linear texts, as blue site visitors included more
linearly presented information in their written productions than
rey site visitors did. However, in the case of nonlinear texts, visi-
tors to the blue site introduced less information from indented
texts into their letters than visitors to the orange site did.
Our study also yielded information about the colour orange that
were new to the field of HCI. Contradicting previous suggestions
about the effects of cooler versus warmer colours, our results
showed that the orange site was greatly appreciated by the visitors,
who spent more time on this Website than they did on the blue
site. Thus, visitors may have felt more affinity with this site, which
would explain why they stayed so long on it and found it so
appealing. Letters about the orange site also contained the most
information, this being especially the case when that information
came from nonlinear texts. Thus, in our experiment, orange fa-
voured not only information processing, but also the memorization
and retrieval of information acquired from the Website.

Now, of course we don’t want to go around designing all orange websites. Or black websites with yellow text — that would be nearly as horrible as the current situation. But what legibility studies like this demonstrate is that the conventional wisdom — that every page needs to be pure alabaster white — is just misguided and not based in science.

Yes, contrast is important. But contrast can be obtained with many, many color combinations. Your websites should sing your brand, not just be a neutral, inoffensive white so as to not make anyone take notice. If you relegate color only to your header, you’re missing one of the joys of living in a modern computer age where we no longer have to worry about designing for “web safe” colors.

You have 16 million colors to choose from. Please choose something other than white or gray.

PS – The answer to the 3 images is: WebMD, Everyday Health, Mayo Clinic.